The commitment to go line dancing felt like a stone.

I’m good at going places by myself—restaurants, concerts, events, whatever. But line dancing was different.

It was in a bar. Bars trigger memories of not measuring up, starting in college, and continuing.

Back when I was traveling between Chicago and Cincinnati every other week, I would often stay at a hotel that had an upscale bar next to their fine dining restaurant.

One night I had dinner there with a colleague who also didn’t live in Cincinnati. We sat on the mint green plush seats at a small table in the bar, and talked about how nice it was to have a place like this to come to at the end of a long day, a place that felt comfortable.

“The only thing I don’t like about it,” my friend said, pulling her hair behind her shoulder, “is that guys hit on you all the time.”

“Yeah,” I said, lying. No one had ever hit on me in this bar, and that was before I lost most of my hair and stopped wearing a wig.

As I thought about country line dancing, I was worried that I would be too old, too large, too awkward.

Jim and Jack’s On The River is not on the river, but it’s close. The bar is in a tall old Victorian house, with several boxy additions around the base. It looks like an elderly woman propped up so she doesn’t fall over.

As I walk through the door, the bar is brighter than I expected. It is also bigger. Much bigger. It’s the biggest bar I’ve ever been in that wasn’t a sports bar.

The bar part is off to the side, with two insignificant TVs mounted on the walls. The Reds are playing and no one is watching.

The dining area covers two large rectangles bordering a dance floor. There’s a red curtain that closes off part of the room, so there may be even more seating.

Next to the red curtain is a long high counter, with lots of men and a few women standing around it, drinking and laughing. They look like a crew that just got off work. Tables for four fill the rest of the dining area.

The hostess leads me to a seat in the mostly empty room. At the table next to me are four women, all my age or older, all drinking bottled water, no food or alcoholic beverages in sight.

Just before seven o’clock, about twenty more women come in, sprinkled with a few men. I wonder how many people have come to dance. When the music starts, I get my answer: all of them.

There had been no reason to think I might feel out of place. There is a place for everyone here.

The oldest woman from the table next to me, the one I think is wearing a wig, takes tiny steps as she dances, but she knows them all. There is a dancer who is a little person. There is a dancer with long gray hair who has a bend to her neck that puts her head well in front of her body. She wears a sash belt tied at her waist and long earrings that dangle from her ears. Silver spangles cover both.

When the instruction starts, I get up to dance.

Other than not knowing the moves, I fit right in. 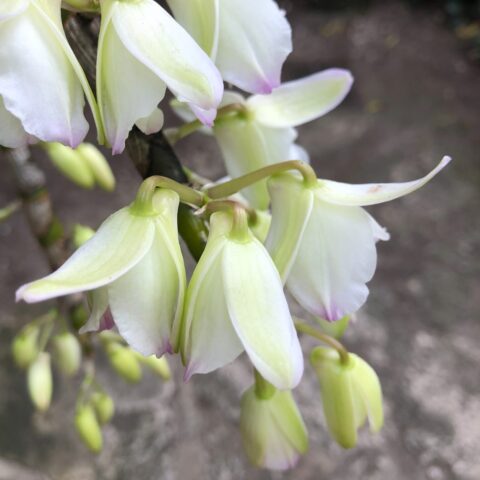 Thankful for friends who see me with kinder eyes than I see myself.