I should be able to believe that I’m intelligent because, as an adult, people have told me this, often.

But my self-perception was formed in those comparative junior high and high school years, shaped by proximity.

Facts: There were 1200 students in my freshman year high school class, 880 of us who managed to graduate. I was ranked 36. My friends were ranked 2-32, and number 2 should have been number 1, but the school failed to count the extra class he took just because it interested him.

Net: Everyone I hung out with was smarter than me.

And as I think about it, my father—intellectually gifted but emotionally impoverished—was also a factor. He said to me in high school, “I used to worry about you, but now I see how smart your friends are, and I know that if smart people want to be with you, you’ll be okay.” I asked my dad if I was smart. He deflected and talked about how smart Audrey was (Audrey is the one who went to Cornell and double-majored in math and computers, back when computer programs ran on punchcards).

What I believe about intelligence is that we all have it, we just have different kinds, and they all matter. I need to remind myself of this—that I have it, and so does everyone else.

There is linguistic intelligence, a form that school rewards. People with this are good with words—either spoken or written or both.

There is logical/mathematical intelligence, the other form valued by school. This was Audrey’s—and my father’s—favorite realm.

There is spatial intelligence, an intelligence not rewarded in school until you get to shop class, art, or architecture. Trent had this. I remember pointing to a 3D drawing and saying to him, “You know how you can look at this and turn it around in your mind, see it from any angle?” “Yeah.” “I can’t do that.” He was shocked.

There are additional forms of intelligence, depending on your research source, some more valued than others. Kinesthetic intelligence is the great frustration of the school students who have it in abundance but are locked in their chairs. It is not rewarded until they get to the high school, college, or pro team.

I think there are even more intelligences than are typically counted, such as energetic intelligence—people who have high sensitivity to the emotions of others.

We all have intelligences in different forms. We can get to know our intelligences, value them, befriend them, and depend on them to benefit ourselves and others.

In my morning meditation, I speak to my third chakra twice, because my third chakra can use all the strengthening it can get—this is the seat of self-esteem, will power, and personal responsibility.

My eyes are closed. I move them to the area just beneath my rib cage (my liver) and say the words:

In the ‘I am Authentic’ post, I mentioned thyroid cancer but failed to mention that was back in 2015. My thyroid was removed, I took one radioactive pill, and that was essentially that. The only lasting impacts are an annual trip to see Dr. Heiden, which is a pleasure, and less hair than I used to have, which seems like an okay trade.

I’m doing okay, most of the time. Today I took Leda’s extra bags of food and treats to the place where she used to board when I traveled. That was hard because they knew her and loved her and they were sad, too.

Leda had stuffed animals which she mostly ignored but she had two that she would sometimes pick up and take to her bed—the lamb and the wolf.

The weekend before she died, she kept the lamb and wolf with her the whole time.

Now, when I go to bed, instead of kissing the top of Leda’s head goodnight, I kiss the lamb, and as I hold the lamb and the wolf, it feels like Leda is holding me. 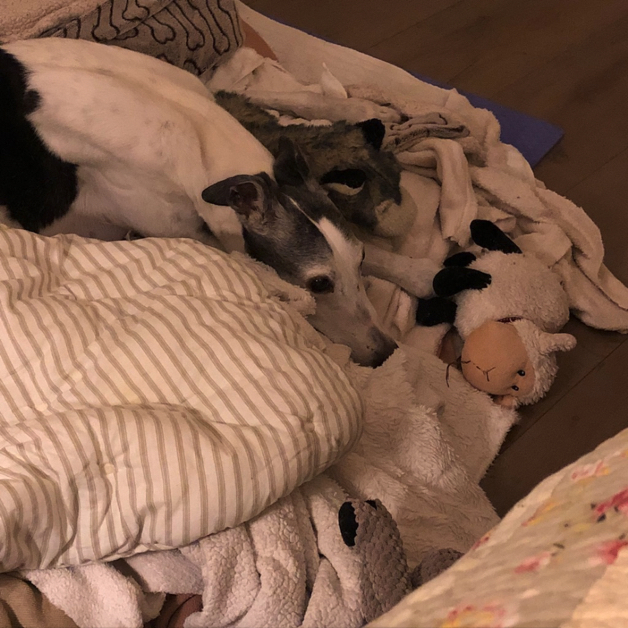 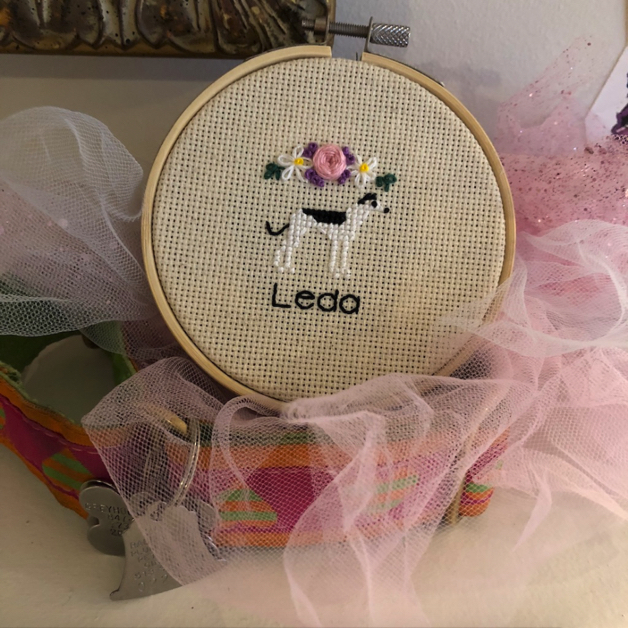 Thankful for a friend who made this for me, and made me cry happy tears.

2 thoughts on “I am Intelligent”