My brother Eric is adopted. It was never a secret. My parents got him when he was ten days old. He was my little brother.

I’ve wondered about my brother’s history but he never seemed interested. A few years ago, my not-at-all-subtle and potentially obnoxious self gave Ancestry DNA test kits to my mother and brother for Christmas.

My mother, who grew up hearing her parents speak German at home, learned she is mostly Scandinavian. My brother gave away his kit.

But last summer, my brother became interested. He got his own Ancestry kit. When his results showed close family, he DM’d the matches, explained that he was adopted and looking for relatives. After several months and no responses, he and I commiserated. We wondered if anyone had even seen his messages, or if their subscriptions had expired.

Yesterday, my brother called. I picked up, worried. He and I don’t talk unless it’s a birthday or Christmas, we text.

Yesterday, my brother talked to the woman he had wondered about his whole life.

Eric sent me the DMs he had exchanged with his first cousin as intermediary for his mother. I was impressed with the care they showed for each other, their expressed desire to talk and graciousness if the other didn’t want to.

The first cousin took a photo of his birth mother for Eric, and Eric sent it to me. She is beaming.

I wondered what that was like, to be a sixteen-year-old girl and find out you’re pregnant. To be seventeen and give your baby boy away. To be eighty and learn your son has found you.

I’ve always thought of my brother as a seed, floating in the air, looking for his garden. He’s found it. My brother’s garden has a mother and half-siblings and lots and lots of first cousins. My brother comes from a big garden—and it seems—a garden full of love. 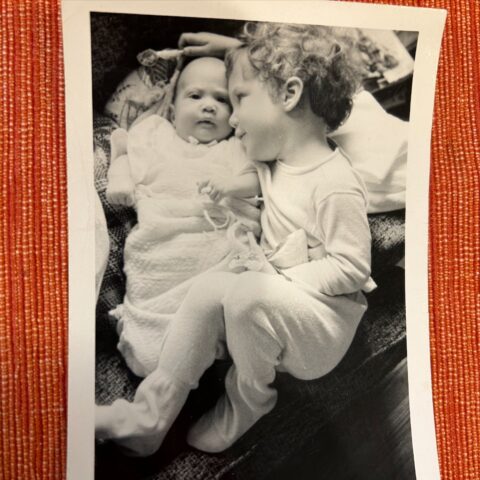 Thankful for my brother’s new family.