Last Saturday night I went to the Mercantile Library’s Niehoff Lecture. It’s their annual fundraising event, and it’s glorious. The men wear tuxes or dark suits in fine cloth, the women and the non-binary wear sparkles. The pre-lecture chatter on the second-floor atrium of the Hyatt Hotel is deafening.

Here they are, seated in the library, before the event. 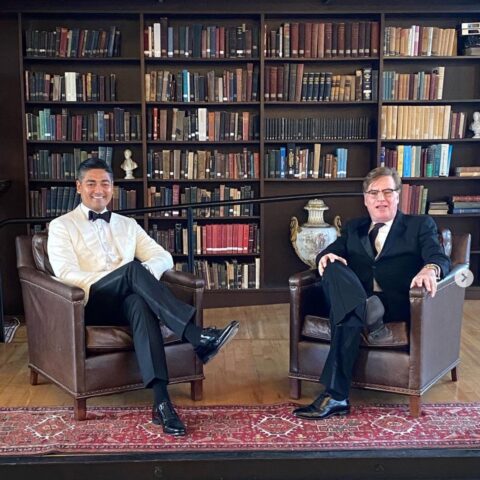 Full disclosure: I’m a Sorkin fan. I love the rhythm of his dialogue and the brilliant actors drawn to his roles who tear those words like meat from bone.

There were three lessons I took from Aaron Sorkin, as my eyes bounced from the two men far away at the center of the stage to the giant screen nearby. 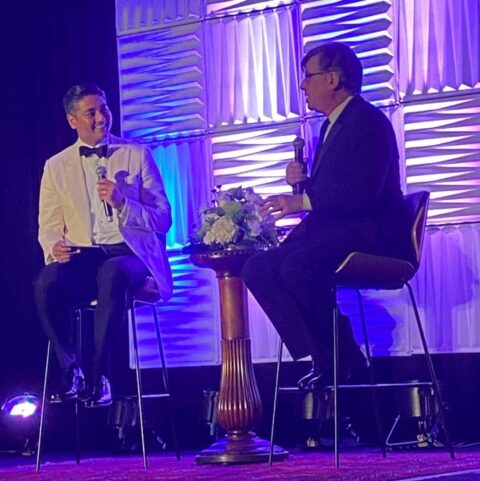 1. Even The Great Aaron Sorkin is plagued with doubt. Sorkin said that after he finished an episode of The West Wing, he was convinced he couldn’t write another. The well was dry. Even with glowing reviews and Emmy awards, the doubt persisted. The only thing that kept him writing was knowing the next episode was due.

2. How to write an anti-hero. “Write an anti-hero as if they are standing before God, making their case as to why they should be let into heaven.” Sorkin has written three anti-heroes: Colonel Jessup of A Few Good Men, Mark Zuckerberg, and Steve Jobs. Sorkin said it was the writer’s job to crawl inside the head of the anti-hero and make their case. You must have empathy. Pureval asked, “Of the anti-heroes you’ve written, were there any whose heads it was harder to crawl inside, where it was harder to have empathy?” Sorkin said there was: Steve Jobs. Sorkin also has a daughter, and he couldn’t imagine how a father could be so cruel to his daughter, and do it so publicly.

3. Giving credit where credit is due. After the lecture, I went back home and looked up Sorkin on Wikipedia. There had been several times during the night where Sorkin referenced A Few Good Men, his big break. It was the first script he wrote, while he was bartending, on cocktail napkins. At the end of the night, he stuffed the napkins in his pockets, went home, and typed them up on his 512k Macintosh. Sorkin wrote A Few Good Men as a play, and when Hollywood wanted to turn it into a movie, Sorkin lobbied to have it also produced as a play. Although Wikipedia described how Aaron Sorkin got to work with others to turn the stage play into a screenplay, the great writer William Goldman (The Princess Bride, Butch Cassidy and the Sundance Kid) and the great writer and director Rob Reiner (Stand By Me, When Harry Met Sally), Sorkin never said a word about either, or any other writer he worked with or learned from in his career.

I still admire Sorkin, but I’ve taken him off the pedestal. 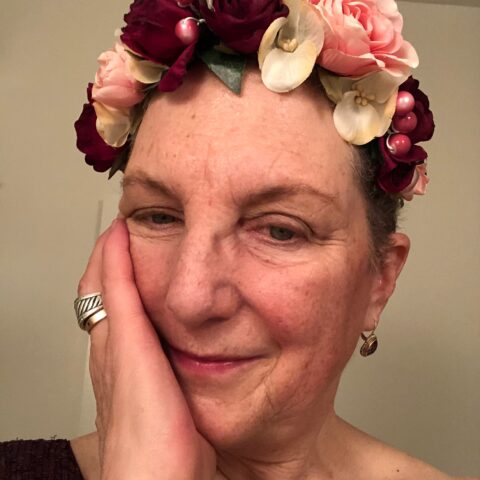 Me at the end of the night, thankful that my solution for what to do about my hair turned out okay. Better than okay. Strangers on the street said I looked lovely.

PS: Here are the chairs at the Mercantile Library, where Pureval and Sorkin sat, and where sometimes I sit, too: 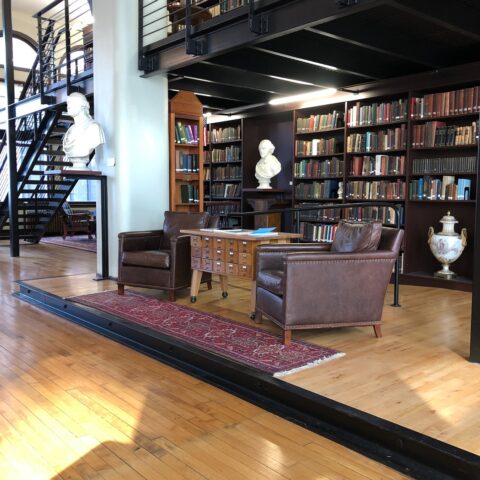