Recently I had a cranio-sacral massage because I never had one before and I’m always up for whatever I haven’t tried in the realm of massage therapy. The massage was incredibly relaxing in an odd way—it wasn’t so much that my muscles felt relaxed, it was more like my soul felt relaxed.

I decided to go back and do it again, because why wouldn’t I do something that makes me more relaxed in less time than a traditional massage? I can enjoy something without understanding how it works (well, sometimes).

On the second visit, as the therapist held her hands over my head, then my neck, then my heart, I felt the familiar waves of relaxation. But when she got to my abdomen, I felt different. I felt sad. Not a little sad, a lot sad. A big wave of sad. Sad worth mentioning and I might as well because there were tears flowing out my eyes.

When I feel sad, I’ve learned to ask myself, “What is the thought I am thinking that is causing me to feel sad?” Usually the thought is an argument with reality, in the present, or often, in the past. (Fear occurs over the future.) I sifted through my thoughts but found nothing that could be articulated, just this profound feeling of sad. Then I noticed her hands.

“It’s a lot of energy being released.”

“Tell me about it. I’m sweating over here.”

That’s when I realized I was sweating, too. This was straaange. Nothing came to mind for whatever might be “being released.” And then I remembered something I hadn’t thought about in almost thirty years.

Denial is very strong. I learned this when I worked at the University of Minnesota Derm/Surg outpatient clinic. A woman came in with a large bandage over her nose. She told the dermatologist, “I have a blemish.” When the doctor removed the bandage, everyone in the room (the doctor, the nurse, the resident, the medical student) saw that the part of her nose that should have been under the bandage was missing.

I asked Nancy, the head nurse, about it.

“How does someone have part of their nose missing and not go to the doctor until their nose is almost entirely gone?”

Nancy repeated those words when a man came in complaining of “a bump on his stomach.” When the doctor parted his gown, there was a growth the size of a grapefruit.

I normally believe losses need to be honored so the person can move on from the loss but that felt strange in this case. I was ready to forget about it but decided that if I was sad and sweating, maybe it was a loss worth acknowledging.

Often I will make a ceremony of burning things to let go of the past. Or tossing them into a river or an ocean. That didn’t seem right this time. Instead, I gave her a gender and a name and I wrote her a letter and even that feels strange. But at least I’m no longer pretending she never was. 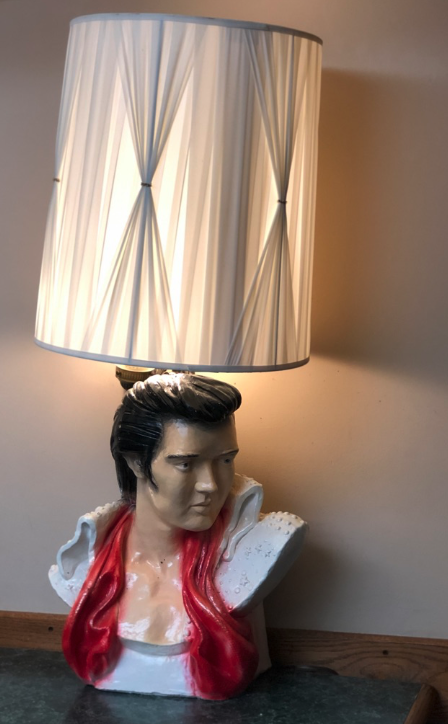 And coffee shops with Elvis lamps.

2 thoughts on “A Strange Thing”